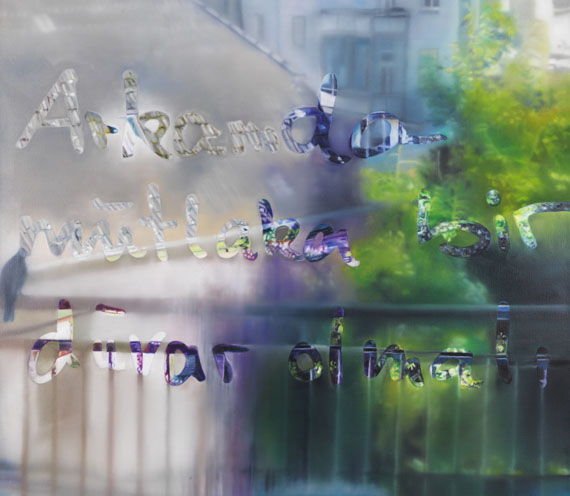 • Kneffel is one of the most important contemporary artists and a master of the sophisticated optical illusion.
• Remarkable example of Kneffel's virtuoso use of sharpness and blur and her complex play with illusion.
• Recently the Kunsthalle Bremen and the Frieder Burda Museum honored the artist with grand exhibitions.
• In 2012 Kneffel joined the artist squad of the renowned Gagosian Gallery, New York.
• She was appointed professor at the Academy of Fine Arts, Munich.

The work is mentioned on the artist's official website.

Karin Kneffel is one of the most important contemporary German painters and is a master of sophisticated optical illusion. Her representational painting masters the virtuoso play with alienated effects, with unusual points of view, extreme close-ups, reflection and blurs. The versatile use of blur in Kneffel's work bears witness to her studies with Gerhard Richter, whose master class she attended at the Düsseldorf Art Academy in the 1980s. In contrast to Richter, however, the special appeal of Kneffel's paintings lies in the unique combination of sharpness and blur, of alienation and photorealistic accuracy. In addition to the large-format complex paintings, she made smaller representations in which she varies a specific subject. For her first exhibition at the Dirimart Gallery in Istanbul in the autumn of 2013, she created a series of several works on nearly squared canvases measuring 90 x 100 centimeters. The pictorial compositions are variations of a similar structure. Through a fogged-up pane of glass, we see an urban landscape in the change of the seasons, a sentence written across each pane. The first painting in this series reads "I need a wall behind me", for her Istanbul audience she had the sentence translated into Turkish ("arkamda mutlaka bir duvar olmali") and also painted different variations with similar versions of the translation on the pane. Individual syllables and words are repeated, but the different phrases make it clear what a spectrum of variations the Turkish language is able to offer. Karin Kneffel manages to connect very different levels of consciousness by creating distance between the depicted scene and the view of it. She succeeds in doing so by looking through the pane of glass, which pushes itself between the subject and the viewer like a window. The window is identified as such by using it as a canvas for a painting consisting of water, raindrops or condensed water. In this case photos also serve as a starting point. In order to recreate this special effect as realistically as possible, she actually uses a pane of glass that she places on the photograph and which she wets with water. The view itself becomes the subject and enters into a dialog with the motif. Kneffel, who is a professor at the Academy of Fine Arts in Munich, has constantly expanded her pictorial language over the past decades, constantly developing new motif worlds, always daring to try something she has created both an extremely varied and yet highly consistent painterly oeuvre. The slogan "I need a wall behind me" is programmatic for progress based on a supporting backup that leaves room in all directions. [SM]
Ulteriori informazioni
+
Vendere
Desidera vendere un simile oggetto?
+
Registrare di
Karin Kneffel
+
Domande sull´acquisto
+
Contattare esperti
192
Karin Kneffel
Ohne Titel (arkamda mutlaka bir duvar olmali - I need a wall behind me), 2013.
Olio su tela
Stima:
€ 50,000 / $ 46,000
Risultato:
€ 87,500 / $ 80,500
( commissione inclusa)
Ulteriori informazioni
+
Vendere
Desidera vendere un simile oggetto?
+
Registrare di
Karin Kneffel
+
Domande sull´acquisto
+
Contattare esperti
Altre cose che potrebbero interessarti
+
tute le offerte
Karin Kneffel - Ogetti venduti
+
tute le offerte