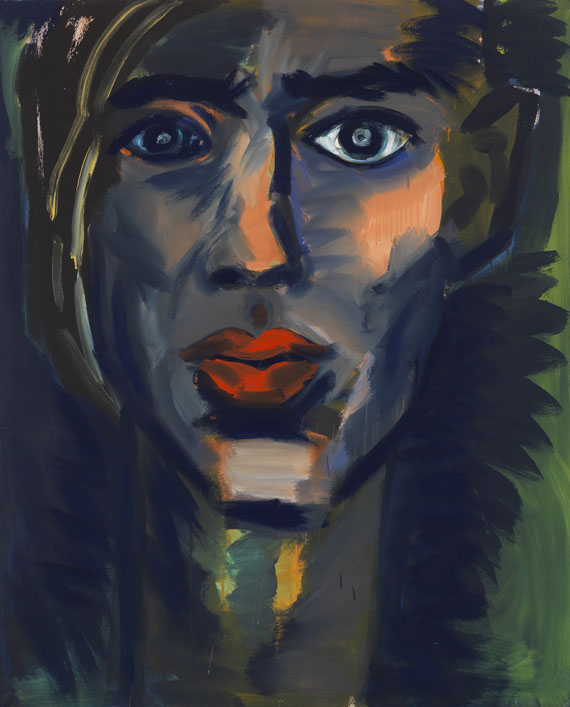 • The work shows the singer and musician Claus Gässler, whom Fetting also captured on photographs (Claus Gässler. Pilatus, 1982) and films (Bianca, 1982) in those day.
• The year this work was made, Fetting's paintings were part of the important exhibition "Zeitgeist" at the Berlin Martin-Gropius-Bau.
• Paintings from the 1980s are his most sought-after works on the international auction market.
• A similar portrait is part of the collection of the London Tate Gallery.

This work's authenticity was kindly confirmed by the artist. We are grateful for his kind support in cataloging this lot.

In the early 1980s, Rainer Fetting's artistic career had its first peak. In 1980, his works were shown in the exhibition "Heftige Malerei" at Berlin's Haus am Waldsee, in 1981 he was involved with the exhibition "A New Spirit in Painting" at London's Royal Academy, and in 1982 Berlin's Martin-Gropius-Bau shows his work in the highly acclaimed exhibition "Zeitgeist". At that time, Fetting was represented by, among others, Mary Boone Gallery in New York, and exhibited at Anthony d'Offay in London. Most recently, the comprehensive retrospective "Here are the Lemons" at the Museum für Kunst und Kulturgeschichte Schloss Gottorf and at the Dortmunder U (2020/21) honored his work.
In 1978, a DAAD scholarship enabled the young artist to spend his first year in New York. The wealth of impressions, experiences, and adventures left a lasting impression on him and would later lead to a another, almost ten-year stay in the American metropolis. The young painter first returned to the divided city, and worked on impressive, energetic pictures of his Berlin surroundings. At the time, as drummer in the punk band "Geile Tiere," Fetting painted, among others, musicians from his circle of acquaintances, and continued to work with the fellow artists with whom he had founded the collectively run "Galerie am Moritzplatz" in 1977. The protagonists of subcultural Berlin art world, including Luciano Castelli, Helmut Middendorf, Salomé and Bernd Zimmer, made a name for themselves as "Neue Wilde" or "Junge Wilde" and also as the "Moritzboys."
In the present portrait "Claus", Fetting also paints the expressive face of an acquaintance from the contemporary music scene, the musician and singer Claus Gässler, who at the time was performing with, among others, the punk band "V. E. B. Sehnsucht". Fetting also filmed the band next to a sand mountain by Joseph Beuys at Berlin's Martin-Gropius-Bau for his film "R. F.s Zeitgeist". Gässler also posed for Fetting for other films, photographs and paintings, including "3 films - the mugger, Inselreise, bianca" (1981) and the double portrait "The Idiots (Claus and Rainer)" (1982). A photograph by Rainer Fetting shows Gässler naked balancing on two pieces of furniture with his legs spread ("Claus Gässler. Pilatus," 1982, Galerie Deschler, Berlin), and the comprehensive Fetting monograph published in 2009 includes not only the work shown here, but also a performance installation of a crucifixion in which Gässler was bound to a painted wooden cross as a contemporary Jesus with loincloth and bloodstains.
With this hypnotically expressive depiction of the narrow, almost androgynous face, the wild hairstyle, the deep red lips, and the alert, radiant blue eyes, Fetting plays his characteristic game with gender, identity, same-sex eroticism, travesty, sensuality, and a desire for provocation. At a time when homosexuality had very few advocates and the abolition of Paragraph 175 was still more than a decade away, this sensual, strangely touching androgynous portrait is not only a painterly role-play, but also a rebellion, a demand, and an exclamation point. [CH]
Ulteriori informazioni
+
Vendere
Desidera vendere un simile oggetto?
+
Registrare di
Rainer Fetting
+
Domande sull´acquisto
+
Contattare esperti
140
Rainer Fetting
Claus, 1982.
Olio su tela
Stima:
€ 50,000 / $ 46,000
Risultato:
€ 112,500 / $ 103,500
( commissione inclusa)
Ulteriori informazioni
+
Vendere
Desidera vendere un simile oggetto?
+
Registrare di
Rainer Fetting
+
Domande sull´acquisto
+
Contattare esperti
Altre cose che potrebbero interessarti
+
tute le offerte
Rainer Fetting - Ogetti venduti
+
tute le offerte