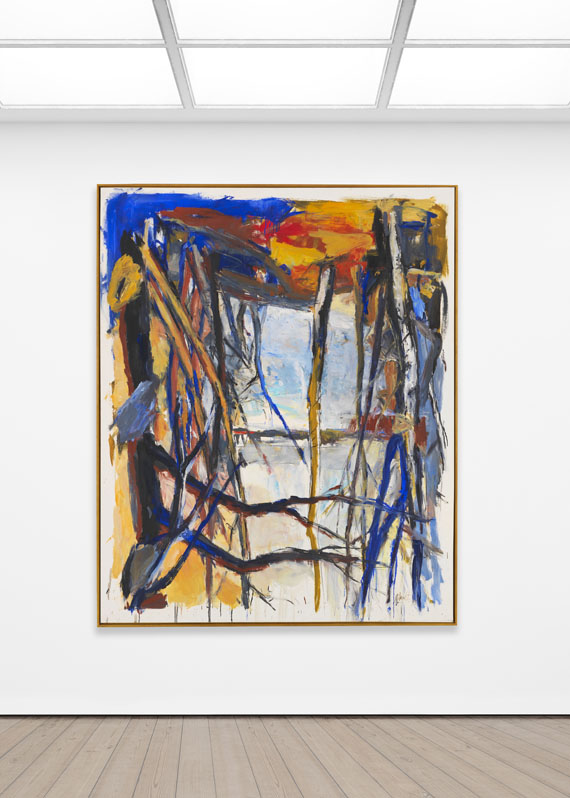 • The year this work was made, Georg Baselitz represented Germany at the XIII. São Paulo Biennale.
• In the 1960s and 1970s, the forest was one of the artist's most important motifs – in "Der Wald auf dem Kopf“ (Museum Ludwig, Cologne) he rotated the motif by 180° for the first time.
• The familiar yet unreachable childhood landscapes, which he depicted exclusively in 1975, strengthened his singular artistic position.
• Lately, the Centre Pompidou in Paris honored Georg Baselitz with a comprehensive retrospective (October 2021 to March 2022).
• For the first time on the international auction market (source:artprice.com).

The work is documented at the Archive Georg Baselitz, Munich. We are grateful to the archive for the kind support in cataloging this lot.

"The landscape I am familiar with can become a model, the one I just see can't.“
Georg Baselitz, quoted from an interview with Heinz Peter Schwerfel, in: Detlev Gretenkort, Georg Baselitz, Gesammelte Schriften und Interviews, Munich 2011, p. 185.

"The object doesn't express anything at all. Painting is no means to an end. On contrary, it is autonomous. And I said to myself: If that's the case I will have to take everything that has ever been the subject of painting – landscape, portrait, nude, and turn it upside-down. That's the best way to liberate the depiction from the content.“
Quoted from: Franz Dahlem, Georg Baselitz, Cologne 1990, p. 88.

Georg Baselitz is considered the most important contemporary German artist. The wide variety of approaches and motifs in his gestural, expressive, figurative painting testify to his greatness. In his works he quotes art-historical traditions, at the same time he both overcomes and continues them. Georg Baselitz was born in the year before the outbreak of World War II and grew up in the shadow of the terrible events of the war. He initially began his painting studies in East Berlin, and from 1957 to 1962 Baselitz continued his education at the Hochschule der Bildenden Künste in Berlin-Charlottenburg, where Hann Trier was one of his teachers. He became a citizen of the FRG in 1958, and the construction of the Berlin Wall in 1961 meant that he would be denied access to his old home. An eventful German biography.

In a phase of intense experimentation, Baselitz came to terms with his own national and artistic identity. Themes revolving around questions regarding German identity, history and collective memory characterize his entire oeuvre. Baselitz aimed his works against established categories and rules; his painting was directed against the common conceptions of art. In 1963, authorities confiscated the two paintings "Die große Nacht im Eimer" (The Big Night in the Bucket) and "Der nackte Mann" (The Naked Man) from Galerie Werner & Katz in Berlin, which was a great scandal. Charges for pornography were dropped in 1965. In 1969 the artist made his first work with the motif upside down. This progressive step, which eventually became Baselitz’ artistic trademark and earned him a top rank in German post-war art, was a painterly act of liberation.

The Forest as a Part of the German Identity

Nordic people in particular are said to have a deep connection to the forest. The forest is the theme of many folk songs and poems and is captured in paintings that depict it as a place of longing, a place of silence, retreat and strength. To a greater extent, Romanticism has shaped this connection to the forest, especially as part of the German identity. In the catalog of the Baselitz exhibition in London in 2007, Elias Canetti remarks: "In no modern nation in the world has the spirit of identification with the forest [Waldgefühl] remained so alive" (E. Canetti quoted in N. Rosenthal (ed.), Georg Baselitz, exhibition catalog, Royal Academy of Arts, London, 2007, p. 121). In his work, Georg Baselitz not only examines German history, the question of identity and his own biography, he always integrates the art-historical heritage into his pictorial approaches. His uncle Wilhelm drew his attention to the 19th century painter Ferdinand von Rayski. He took him to the Galerie Neue Meister in Dresden, where he saw the artist’s works. "My uncle [a priest in Dresden] .. showed me the museums in Dresden and told me about art history. He was the first to show me paintings by Ferdinand von Rayski." (Georg Baselitz quoted in: Detlev Gretenkort, ed., Georg Baselitz: Collected Writings and Interviews, London, 2010, p. 153). On the one hand, Rayski's forests represent a naturalistic painting tradition going back to the nineteenth century; on the other hand, Rayski's Saxon landscapes show childhood places that had become inaccessible to Baselitz after his move to West Berlin and the construction of the Berlin Wall in 1961. Caspar David Friedrich's painting is another important guiding light for Baselitz. Friedrich constructs landscapes and idealizes actual circumstances: “A landscape is a state of mind. Man should not only paint what he sees in front of him, but also what he sees within himself. For Baselitz, who is concerned with the landscape in his memory, this radical approach is of crucial importance and the reason for a lifelong examination.

In 1975, Georg Baselitz and Elke bought Derneburg Castle, a historic site surrounded by water in Lower Saxony. Throughout the year, even during his stay in New York, Baselitz exclusively painted the Saxon landscapes he knew from his childhood. "Hofteich" from 1975 is an outstanding example of Baselitz' 1970s landscape painting. Breaking with the traditional rules of pictorial perspective, he turned the forest upside down and developed an alternative mode of representation by distorting the landscape on the canvas, thus shattering our viewing habits. Drawing on the pictorial tradition of Romanticism and familiar childhood motifs, he conceived a seminal visual language anchored somewhere between realism and abstraction.

Familiarity as Model
The simpler and more familiar the motifs are for the artist, the more intensively he can devote himself to form and color. Familiarity provides a secure foundation on which groundbreaking endeavors can be built. Since the 1970s, Baselitz has used gesture, color and materiality to give his works an entirely new sense of rawness, directedness and structural dimension. Color is applied freely and directly onto the canvas. After a finger painting period, which made his expression more subtle, his style became stronger and more striking, as he made increasing use of the brush again, running it over the canvas in passionate gestures and intense flow. The observer senses the emotionality he puts into the depiction of landscape motifs from his childhood. In doing so, he created a new intimacy and intense physical connection to his works. They show brush trails and scratches, finger traces and broad brushstrokes that form a thicket of colors and shapes of shrubs and trees in close-up. The composition is not bordered, the blank margin makers the medium painting perceptible. One of his early landscape paintings, "Fingermalerei – Birken " from 1972 was exhibited at documenta 5 in the year it was created. The response was overwhelming, and there was a sense that the forest motif, so innocuous and deeply German at first glance, was capable of opening a new chapter in painting. Baselitz, at a time when American Pop Art and French-rooted Informalism dominated the scene, found new paths in representational art that unfolded its artistic power without the need for any ideology whatsoever. [SM]
Ulteriori informazioni
+
Vendere
Desidera vendere un simile oggetto?
+
Registrare di
Georg Baselitz
+
Domande sull´acquisto
+
Contattare esperti
50
Georg Baselitz
Hofteich, 1975.
Olio su tela
Stima:
€ 700,000 / $ 644,000
Risultato:
€ 1,045,000 / $ 961,400
( commissione inclusa)
Ulteriori informazioni
+
Vendere
Desidera vendere un simile oggetto?
+
Registrare di
Georg Baselitz
+
Domande sull´acquisto
+
Contattare esperti
Altre cose che potrebbero interessarti
+
tute le offerte
Georg Baselitz - Ogetti venduti
+
tute le offerte