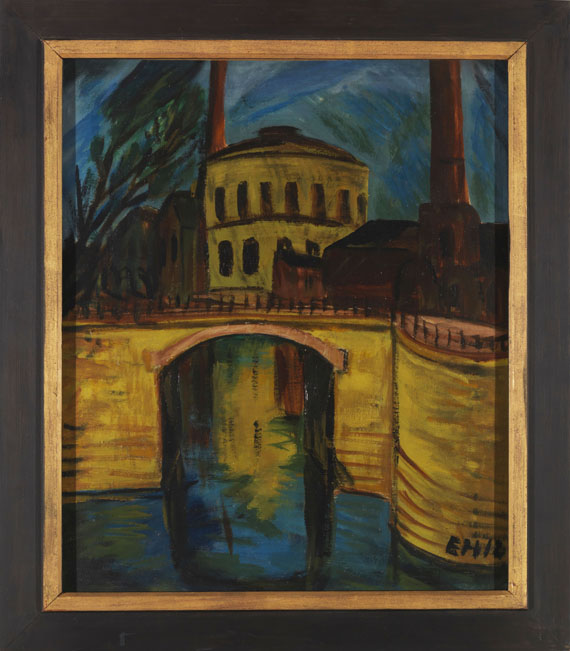 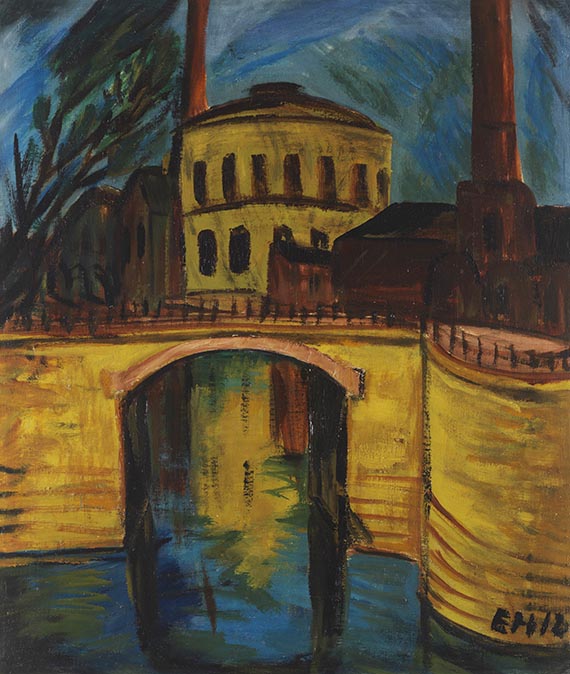 • Berlin paintings are documents of Erich Heckel's great fascination for modernity, for technology and metropolitan life.
• With the colors' expressive radiance, the former architecture student adds an almost mystical meaning to the industrial building.
• The few preserved paintings from this creative period are museum-owned today, among them "Strasse in Berlin (Stadtbahn i. Berlin)" by the Städtische Museum Abteiberg in Mönchengladbach, while others like "Vorortbahnhof bei Berlin" are considered lost.

Erich Heckel moved to Berlin in December 1911. In a conversation with R. N. Ketterer in 1958, he described that the stories Max Pechstein had told him were the main reason for his decision: "A very important reason for me were the news from Pechstein, who described Berlin as a city with a profound interest in art, a city that could possibly offer us a livelihood, while we actually had no possibility to provide for our livelihood in Dresden" (quoted from: R. N. Ketterer, Dialoge, vol. 2, p. 50). In Berlin, the art trader I. B. Neumann promoted the prints of the "Brücke" artists in his art shop, while Galerie Macht organized an exhibition, and suddenly contacts with other artists and important people in the art world came about as a matter of course.
The move from Dresden to Berlin, however, also meant significant change in terms of the living environment. Around 1910 Dresden had about 550,000 inhabitants, while Berlin was almost four times as big with about two million people. The first paintings Heckel created in Berlin testify to the ambivalence of the situation: his beloved Siddi, with whom he moved into a simple attic studio, was ill. ("Kranke", Hüneke 1912-3) The studio had previously been used by Otto Müller; Sidi and Heckel decorated it with fabrics with their own designs, separating a living from a sleeping area. It was December and one can assume that it must have been quite cold in the room, which, as was usual at the time, was not insulated at all.

But Erich Heckel also went outside and explored the city from which he expected so much. On his strolls he tried to understand and experience the city. The paintings that allow us to trace his journeys testify to a great fascination with modernity, technical progress and metropolitan life. He explored the wide streets of Berlin, encountered pedestrians, cars, cabs; trains and trams running on streets and on elevated tracks. Unlike Dresden, Berlin is criss-crossed by a number of canals used to transport goods. In Heckel's few Berlin cityscape paintings, the focus is almost always on crossings of streets, railways and waterways. They fascinated him. This makes clear that Erich Heckel perceived the city in quite a different way than Ernst Ludwig Kirchner, who had been living in Berlin since October. For him, the hustle and bustle of the people on the streets was in the foreground, while Erich Heckel put focus on built things. The few surviving paintings from Heckel's explorations of the city are museum-owned today, among them "Strasse in Berlin (Stadtbahn i. Berlin)" at the Städtische Museum Abteiberg in Mönchengladbach (Hüneke 1911-35), while others like "Vorortbahnhof bei Berlin" (Hüneke 1912-10) are lost.

In our painting, Erich Heckel clearly identifies the motif. "Gasworks on Luisenufer" is the subject. Since 1826, the gas lanterns shined their lights under the linden trees in the capital of the empire. The II. Municipal Gasworks of Berlin, the gasworks Hellweg, whose gasometer can be seen here, was built from 1845 on the site of today's Böcklerpark directly on the banks of the later Landwehrkanal and the confluence of Luisenkanal. Erich Heckel must have chosen the gasworks intentionally and not randomly, as they are a two-hour walk away from the studio on Mommsenstraße.