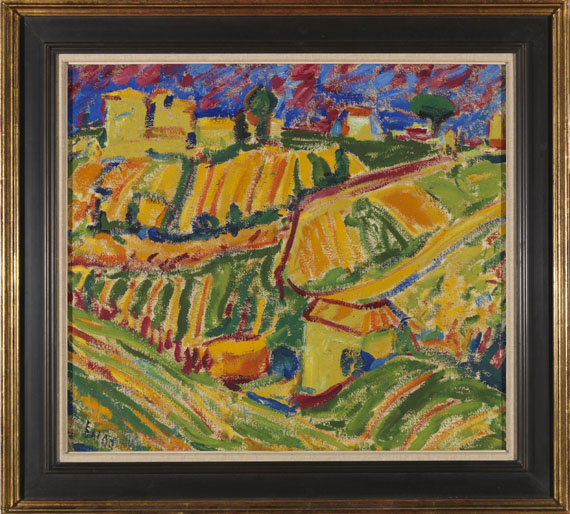 • This is one of just a few preserved paintings that Heckel made on a journey through Italy in 1909.
• "Landschaft bei Rom“ is a highlight of both his early creative period in general and his works from the Italian journey in particular.
• The artist captured the Italian landscape's red-hot atmosphere with sponatenous and rampant brushstrokes.
• Siginificant exhibition history, part of, among others, the important "Brücke" exhibition at Galerie Arnold in Dresden in 1910, and at Tate Gallery in London in 1964.

"I live ten minutes from San Popolo, right between my house and a dilapidated palace, the path goes up to Villa di Papa Giulia on the right, leading through the Arco oscuro to the Aqua acetosa, through vineyards past lush gardens and fields on gentle hills."
Heckel to Rosa Schapire on April 16, 1909.

An important trip to Italy
On his trip through Italy in the spring of 1909 Erich Heckel discovered the south. From February to June, the 26-year-old artist traveled to various places and regions, including Vicenza, Ravenna, Umbria, Tuscany and Naples. His main destination was Rome, where the painter rented his own studio in mid-April. He went on day trips to the surroundings of the Campagna and the Alban Hills. Heckel's fascination with the country south of the Alps resulted in a large number of paintings, watercolors, drawings and prints. The painting "Landschaft bei Rom" is both an outstanding highlight from Heckel's Italian journey and one of the highlights of his early creative period. In Italy, Heckel was not interested in the usual sights or famous monuments, but in the depiction of the original Mediterranean landscape and the everyday life of the people. Hence his pictures of Italy are not so much in line with the bourgeois ideas of a southern Arcadia as the ideal world of past cultural epochs; instead country and people became a field of formal experimentation, for new ways of expression. Heckel reacted to what he observed and experienced with a quick, impetuous gesture of brush and pen.

A pictorial account of an experience
The large-format canvas painting was demonstrably made on site: Heckel provided information about the creation of the painting in his studio in Rome in a letter to the Hamburg art historian and "Brücke" patron Rosa Schapire dated April 16, 1909. In addition to the sketch of the painting with dimensions and details contained therein (fig.), Heckel described his situation by saying, "I live 10 minutes from San Popolo, just between my house and an old dilapidated palazzo, the path to the right leads to Villa di Papa Giulia and through the Arco oscuro to the Aqua acetosa through vineyards past lush gardens and fields on gentle hills.“ He continues about his artistic work and the scenic impressions:"I have painted and drawn quite a bit here; the vineyards are still red and the green of the crops is very intense. It is almost always the same: charming lines of hedges and walls, and furrows and fields that follow the curves and slopes of the hillsides, nestling along them and intersected by other hills. [..] The last few days have been wonderful, blue flickering skies and hot sun, so I am well and working early and in the afternoon." (Quoted from: Transcription of the letter in the estate of Erich Heckel, Hemmenhofen)

Nature captured on canvas
Heckel's light- and color-flodded creation "Landschaft bei Rom" breathes his passionate experience of the southern surroundings. Fully filling the format, the natural scenery of gardens, fields, vineyards, hedges, pine trees and single buildings with a raised horizon builds up in front of the viewer. Coarse brushstrokes and two-dimensional simplifications, intensely luminous color chords and a dynamically moving painting style characterize the vital expressiveness of the representation. Through the lively pictorial language, the immediate visual experience, from which Heckel had gained the powerful expression of the painting, communicates itself very directly and vividly to the viewer. Thin, softly curved brushstrokes, open areas of the painting ground and the restriction to a few, radiant color tones lend the work a watercolor-like, loosened lightness. This reveals the impression of the painting of the "Fauves", which Heckel and the "Brücke" artists discovered in an exhibition at Galerie Arnold in Dresden in the fall of 1908. This impulse gained further impetus by a visit to the large Matisse exhibition at Paul Cassirer's Berlin gallery in January 1909 . Heckel's "Landscape near Rome" exemplifies this change in style. The multifaceted natural scenery spreads out before our eyes. This testifies to Heckel's preference for a landscape depiction from an elevated position, which, in terms of a both deep and wide perspective solution, would characterize the composition of many later pictures. Heckel's pictorial organization was modeled on the landscape’s specific formal structure. The dense and rhythmically staggered topography sometimes had an almost decorative-ornamental quality. Heckel captured a comparable motif in the painting "Häuser bei Rom" (fig.).

Increased color intensity
In Italy, Heckel executed his paintings with glue-bound distemper: "The fresco and the glue paint have this same, colorful effect. When I went to Italy in February 1909, I took some glue paints with me and made some studies on canvas", he later explained the special, matte surface texture of the Italian paintings to Max Sauerlandt (letter dated March 20, 1924, Hamburg State and University Library, Max Sauerlandt estate). In Heckel's view of the Roman landscape, the natural form is transformed into an impulsive, expressive gesture. Under the impression of the southern sun, the colorfulness gains an increased intensity. With vehement and virtuosic brushstrokes, Heckel's painting celebrates the beauty of the lush Italian vegetation and rural architecture. "My goal is to attain a decorative, calm effect, but on the other hand everything pushes for spontaneity and passion", he explained to his Swiss fellow "Brücke" member Cuno Amiet shortly before embarking on the journey (letter from January 30, 1909, quoted from: ex. cat. Künstler der "Brücke," Brücke Museum, Berlin 1975, p. 15).