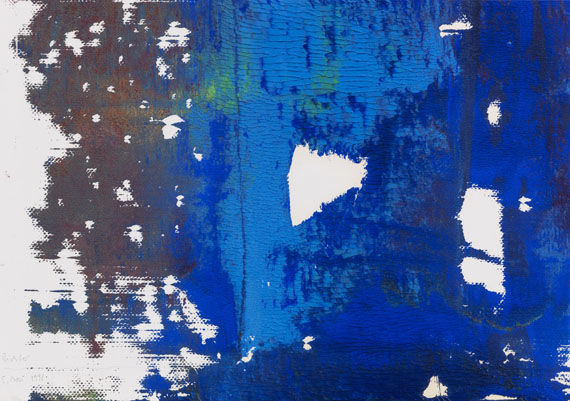 • Offered on the international auction market for the first time (source: www.artprice.com).
• The blue color has a mesmerizing luminosity.
• Through the interplay of different techniques, Richter achieves a spectacular surface composition.
• In this work, Richter applies the squeegee technique to the cardboard.

"The abstract has always fascinated me. It retains so many secrets, just like unchartered lands"
Gerhard Richter, 2011

Essay
Water. Flow. Depth. Magnetic. Abstract. Lively. All of these are possible associations that the work "Ohne Titel (5. Mai 1998)" by Gerhard Richter evokes in the viewer. The blue color is not only particularly compelling for its numerous chains of thought, but also for its enormous radiance. As element it occupies more than half of the surface and therefore determines the picture. On the left, the blue has apparently evaporated and given way to a brilliant white and mixed red tones. The composition appears to be in a state of flux - this impression is reinforced by the nuanced color gradient and the associations mentioned. The impression of the ephemeral moment is substantiated in the picture, and is underlined even more clearly by the techniques Richter employed. Richter's work does not reveal any brushwork in the traditional sense, which is owed to the artist's way of painting. In an interview with Nicholas Serota in 2011, Richter replied to the question of how he began with his abstract pictures: "Oh, the beginning is actually very easy, because at that point I still have a lot of freedom to render something, a color, a shape. And so soon a picture emerges that looks good for a while, so light and colorful and new. […] And then the actual work begins - changing, destroying, creating anew, etc., until it is finished. " (Quote from: Gerhard Richter. Panorama, ex. cat. Munich, 2012, p. 17). The reworking of the picture is an essential characteristic of Richter's art and this work in oil also shows clear traces of a transformative processes. The resulting structures refer to three different techniques, which Richter partly superimposes. For the creation of the picture Richter applies the paint onto the paper with a squeegee, a long, narrow strip made of plastic. He also uses this type of paint application for his large paintings on canvas. The use of the squeegee leads to overlapping, mixing and tearing, the color gains material existence. The American painter and art critic Robert Storr therefore rightly speaks of "geological" picture structures. Here and there color grids can also be found. The American art historian Rosalind E. Krauss called the structure of the grid an "emblem of modernity" and identified it as an essential element in modern works of art by artists such as Piet Mondrian or Josef Albers. Richter also takes up the motif of the grid, but his system is not complete, but broken up and superimposed by other layers of color. The reddish area also reveals elevations, which were probably caused by the pulling and peeling of the paint. These techniques result in an uncontrolled final appearance of the image, it is basically a product of chance. This plays a significant role in Richter's art, because "[..] I would like to get something more interesting than I can initially think of"(quote from: Butin / Gronert / Olbricht (eds.), Gerhard Richter. Editions 1965-2013, Ostfildern 2014, p. 44). Gerhard Richter is one of the most important contemporary artists and has created an extremely extensive and complex oeuvre over more than sixty years, which includes drawings, overpainted photographs, watercolors or oil works in all sizes. While Richter also paints figuratively, especially in his early days, his painting underwent significant change from the mid-1970s on: From that point on his art became non-representational, enormously colorful and was determined by an emphatic application of the paint. "Ohne Titel (5, Mai 1998)" is representative of this abstract style of painting. The 1990s were extremely fruitful for Richter, and not just in terms of the production of art. His art is widely recognized internationally and numerous museums, such as the Tate Gallery, London, or the Marian Goodman Gallery in New York - which also acts as gallery representation in the USA - dedicated solo exhibitions to him. One year before the creation of our oil work, in 1997, Richter received the Golden Lion at the 47th Venice Biennial and his monumental work "Atlas" was shown at the Documenta X in Kassel. On currently 802 plates the artist has put together photographs, newspaper clippings and sketches that document his life and work over more than forty years. This work compilation and the work offered here are of particular importance in the context of the latest developments, as they are distinct visual manifestos of his work. In September 2020 Richter announced that he would stop painting. The church windows for the Tholey Monastery in the Saarland, which were unveiled that same month, and some drawings are said to be the artist's last work. "At some point it will end," he says. "It's not that bad. And I'm old enough now." (Source: German Press Agency). [SL]
Ulteriori informazioni
+
Vendere
Desidera vendere un simile oggetto?
+
Registrare di
Gerhard Richter
+
Domande sull´acquisto
+
Contattare esperti
235
Gerhard Richter
Ohne Titel (5. Mai 1998), 1998.
Oil on board
Stima:
€ 120,000 / $ 140,400
Risultato:
€ 212,500 / $ 248.624
(25% commissione inclusa)
Ulteriori informazioni
+
Vendere
Desidera vendere un simile oggetto?
+
Registrare di
Gerhard Richter
+
Domande sull´acquisto
+
Contattare esperti
Altre immagini 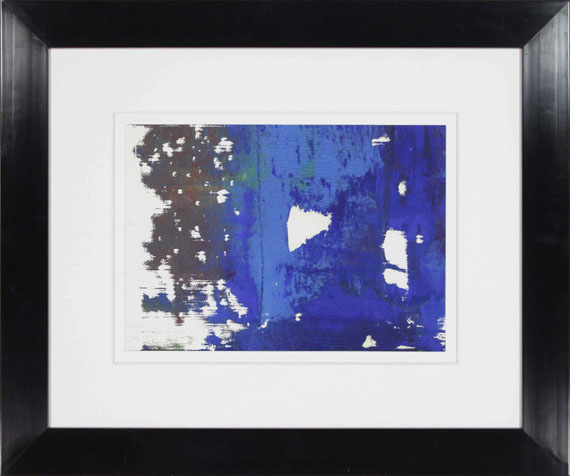 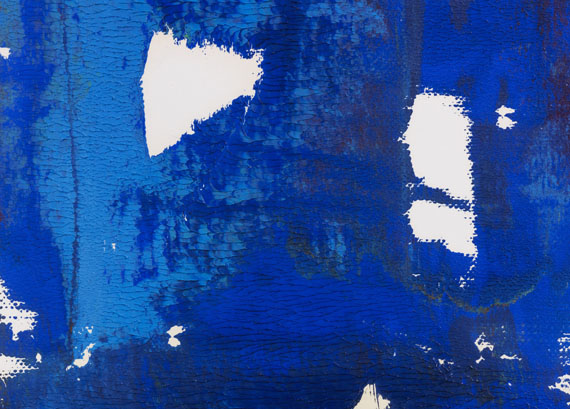 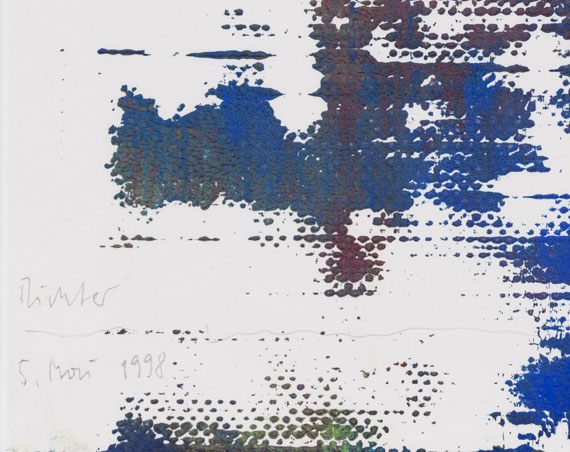 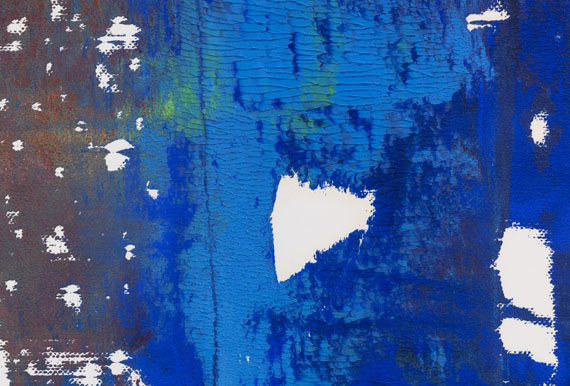 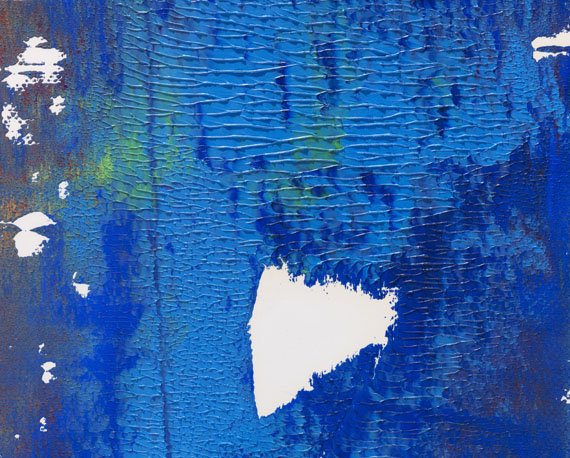 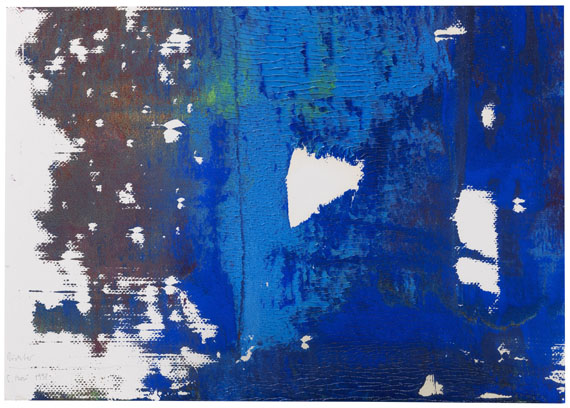