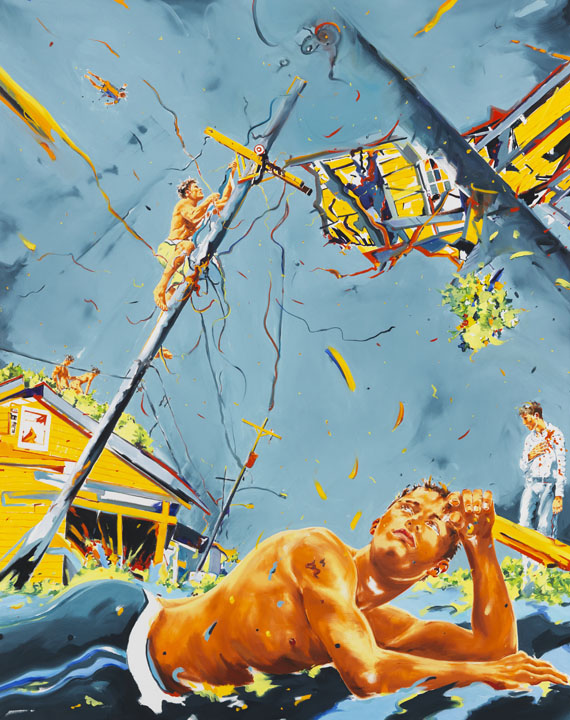 • In 2009 Bisky created a fictitous yet haunting end time scenario in a highly modern imagery and powerful colors.
• The artist is represented in a number of renowned international museums, among them the Museum of Modern Art, New York, and the Museum Ludwig, Cologne.
• Bisky is part of the prestigious König Galerie, Berlin/London/Tokyo.

The work is mentioned on the artist's offical website www.norbertbisky.com/#painting/crossing-2009.

Norbert Bisky is considered one of the most important contemporary German artists (Monopol Magazin) as well as one of the most successful painters of his generation (Spiegel Magazin). The works made after the turn of the millennium, such as the work offered here, come across as somewhat bolder, more blatant, more sexualized, and often more brutal than the more subtle works of his earlier years, in which he allows a supposed ideal world of athletic figures to slowly and subliminally crumble only at second glance. In the late 2000s, the artist experienced several personal strokes of fate. In late 2008, Bisky's younger brother passed away a few days after the artist had witnessed the terrorist attacks on several hotels and public institutions during a short stay in Mumbai in November, which killed nearly 170. "Evil is so insanely banal and not at all exciting", the artist said in retrospect of his impressions, which also found their way into his painting in the following years. "I painted the horror, but not in the sense of action, Hollywood, bang, boom, pow. [..] The things that happen to me need to to make it into my paintings. After all, that's why I paint. But I also know: there are limits, you can't depict everything. The horror in Mumbai just as little as personal tragedies." (Norbert Bisky in a conversation with Julia Rothhaas, Süddeutsche Zeitung Magazin, 4/29/2009, issue 18/2009).

The motif of the present work from 2009 just indirectly reflects Bisky's experience, however, the end-time atmosphere inherent in most of his works certainly seems to have to do with Bisky's emotional state at the time. In the present depiction, Bisky shows an image of destruction, storm, sex, houses falling apart, and a young man with a blood-stained shirt in a surrounding that offers no support, in a world in turmoil. The artist takes up a visual language that reminds viewers of natural disasters like Hurricane Katrina, which raged in 2005, but at the same time also of famous masterpieces from art history, such as Albrecht Dürer's woodcut "Apokalyptische Reiter" (Apocalyptic Horsemen, 1511, Staatliche Kunsthalle Karlsruhe) or the horror and the almost tangible carnality in Théodore Géricault's "Le radeau de la Méduse (Raft of the Medusa, 1818, Musée du Louvre, Paris) – not least because the confrontation with great masterpieces of past epochs has always played an important role ever since Bisky's studies of art history and German literature. Like the castaways fight against drowning on their raft in Géricault's work, Bisky's protagonists seem to be overcome by the chaos surrounding them, in stark contrast to their attractive youth. In its combination of idyllic colorfulness and disaster scenario, Bisky's work appears like a fragmentary memory of a dream we may have just dreamt, which leaves us agitated, while it gives us echoes of images that we can’t put together to a whole. [CH]
Ulteriori informazioni
+
Vendere
Desidera vendere un simile oggetto?
+
Registrare di
Norbert Bisky
+
Domande sull´acquisto
+
Contattare esperti
180
Norbert Bisky
Crossing, 2009.
Olio su tela
Stima:
€ 50,000 / $ 46,000
Risultato:
€ 100,000 / $ 92,000
( commissione inclusa)
Ulteriori informazioni
+
Vendere
Desidera vendere un simile oggetto?
+
Registrare di
Norbert Bisky
+
Domande sull´acquisto
+
Contattare esperti
Altre cose che potrebbero interessarti
+
tute le offerte
Norbert Bisky - Ogetti venduti
+
tute le offerte