23
Karl Schmidt-Rottluff
Straße im Norden, 1906.
Oil on board
Stima: € 250,000 / $ 247,500
Straße im Norden. 1906.
Oil on board.
Signd and dated in lower left. Once more signed and titled "Straße im Norden" on the reverse. 50 x 70.5 cm (19.6 x 27.7 in).
[KT].
• Motif and colors of adolescent radicalness.
• Works by the artist from this early creative period are almost exclusively museum-owned.
• Made on the island of Alsen at Emil Nolde's, whom Schmidt-Rottluff could win as a Brücke member in 1906.
• Extremely rare work from the early creative period, which is rarely found on the auction market (source: artprice.com).
• Comprehensive exhibition history.

The work is documented in the archive of the Karl and Emy Schmidt-Rottluff Foundation, Berlin.

PROVENANCE: Galerie Rosenbach, Hanover.
Collection Hermann Gerlinger, Würzburg (acquired from the above in 1987, with the collector's stamp Lugt 6032).

Schmidt-Rottluff's stay on the Baltic Sea island of Alsen in the summer of 1906 obviously was of great significance. Karl Schmidt-Rottluff made the present painting "Straße im Norden“ (Street in the North), dated 1906, during a visit to Emil Nolde in Sjellerupskov near Guderup on Alsen in late Maye/early June that year. In February 1906, Schmidt-Rottluff used a sensational Nolde exhibition at Galerie Arnold in Dresden as an opportunity to motivate the much older artist to join the young artist group. Nolde accepted the invitation and became a member. He asked Schmidt-Rottluff to visit him in Guderup. "Following our invitation, he arrived after a long walk at the small Alsenhaus in the late afternoon, bringing greetings from the young comrades with him. He stayed with us for several weeks. It was very nice. We talked about art and many other things, philosophized the way young painters tend to. I admired his intellect and knowledge and knew little to say when Nietzsche and Kant or luminaries of that kind came up. How was I to know. When we were pressed for work, he moved to the other end of the forest and came to us only when sorrow and loneliness drove him", recalled Emil Nolde in his autobiography "Jahre der Kämpfe" about his guest (Cologne 1967, p. 99), whom he also portrayed on the occasion of the visit. (Fig.)

For the motif of "Straße im Norden", Schmidt-Rottluff probably chose a section of the path that led past the Noldes' house, a former fisherman's house, where they had been living since 1903. (Fig.) Among the artist's early works, this painting is one of the first in larger format. After the first watercolors, which the self-taught artist was given the opportunity to exhibit at the "Kunsthütte" in Chemnitz while he still attended school, and the more sketchy oil paintings, still created in the summer of 1905, the painting of this landscape indicates a phase in which Schmidt-Rottluff was experimenting with both painting technique and the effects of composition and color. Schmidt-Rottluff attained an astonishingly free handling of pure tones with impasto brushstrokes he placed evenly, almost rhythmically across the painting surface. The artist does not emphasize the motif of the houses to a particularly strong degree, he rather asserts it a position as part of the high abstract quality of the depicted locality.

The commencing independent artistic development was described particularly aptly by the art historian Will Grohmann, who wrote in 1956: "at first […] the Neo-Impressionists come to one’s my, but has to conclude that the light brightness comes about without divisionism and without complementary contrasts." Schmidt-Rottluff was obviously enthusiastic about the possible usage of color regardless of the nature he saw. And last but not least, the ubiquitous painting style of van Gogh in connection with the liberating appearance of the "Fauves" around Matisse and the young Derain, may have helped the artist to his light-hearted carefreeness in the present work. The artist no longer places hard and motionless strokes next to one another, instead he frees himself and gives the brushstroke a strong emotional quality. It is the impulsive-gestural approach with which the artist forces the landscape and the contours of the architecture open, in order to interweave them with a structure developed from the brushstroke, as is typical of other works from this phase, for instance in "Der Garten". (Fig.) During his stay on Alsen, Schmidt-Rottluff broke away from so-called atmospheric Impressionism and developed his signature style, which Kirchner called "monumental Impressionism" in his 1913 "Brücke-Chronic". 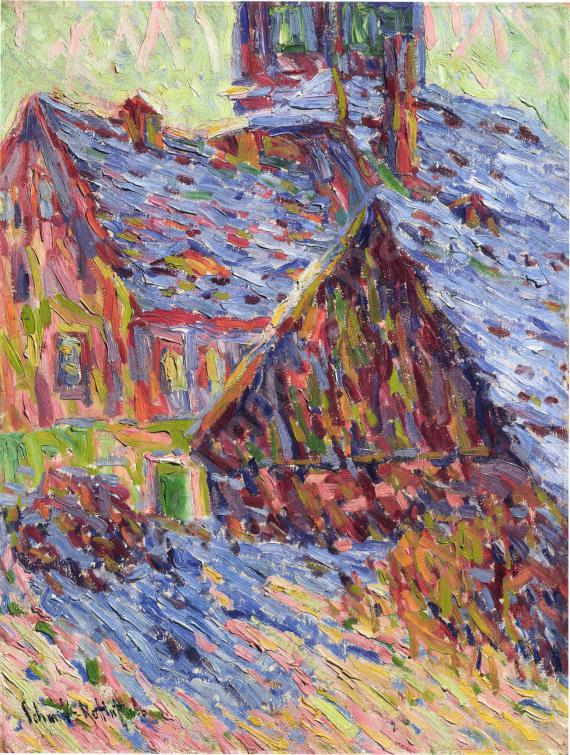