• For the first time on the auction market
• Made during Kirchner's early days in Davos, while the Berlin color palette still prevails
• Henceforth the Davos mountains became his central motif
• Kirchner's return to a spirited painting manner
• From the artist's estate
• Consistent provenance.

This work is documented at the Ernst Ludwig Kirchner Archive, Wichtrach/Bern.

PROVENANCE: From the artist's estate.
Ever since family-owned.

EXHIBITION: This work was on loan in the permanent Ernst Ludwig Kirchner exhibition at the Braith-Mali-Museum, Biberach.

"And it's as beautiful as it used to be, the mountains almost even more powerful than usual and the people good and free."
Kirchner in a letter to Nele van de Velde, dated: Staffelalp, August 8, 1919, quote from: E.L. Kirchner: Letters to Nele, Munich 1961, p. 22.

Essay
In search of relief from his acute depression, Kirchner visited Davos a second time in early May 1917, where he was under medical treatment with the respiratory physician Spengler and his wife Helene. Late June that year Kirchner rented the Ruesch hut on Stafelalp high above Frauenkirch where he sought to find cure through disciplined work, but crippling legs and hands impaired the desired result; however, Kirchner was still able to show a selection of new woodcuts. Late August Kirchner got a visit from Henry van de Velde, at whose advice he went into treatment with the psychiatrist Ludwig Binswanger at his sanatorium "Bellevue" in Kreuzlingen in September. After he was released in July 1918 Kirchner returned to the Stafelalp. Slowly adapting to his new surroundings he became intensively occupied with his again. Erna Schilling, Kirchner’s partner since his days in Berlin, traveled to the Stafelalp and brought along several important things from the Berlin studio with her. In September that year the couple moved into a winter-proof domicile, the ‘Haus in den Lärchen’, which they rented from the farmer Andres Müller for a longer period of time. Accordingly, Kirchner furnished and rearranged the house according to his taste and habits. On July 5, 1919 he wrote to van de Velde: "I am really happy to be and to stay here. On good days I can do a little work and spent my days in peace and quiet among these simple and good people. In this solitude I have fought myself back onto a path that will help me to survive despite the suffering. My days of the circus, the loose women and the society circles are over [.]." (Kirchner to Henry van de Velde, quote after: Hans Delfs (editor), Ernst Ludwig Kirchner. Der gesamte Briefwechsel, Zürich 2014, letter no. 755). Kirchner began to keep his [Davos] diary and returned to the Stafelalp for the summer; numerous graphic works and paintings came into existence, among them this sunlit "Bergdorf mit rosa Kuh". While works that show the city, his studio or the Moritzburg Lakes are typical of Kirchner’s time in Dresden, he put focus on the nightlife on the streets and bars in Berlin, he also discovered new artistic aspects of his new home in the mountains. Now the "wonderful afternoon walk almost all the way up to the Kummeralp" (Lothar Grisebach/Lucius Grisebach (editor), Ernst Ludwig Kirchner. Davoser Tagebuch, Ostfildern-Ruit 1997, p. 36) served as surrogate for his restless strolls through the streets of Berlin. The adjustment was hard, "to weave the immediate life into a carpet without any artistic stylization and yet to capture all of life. I have to try over and over again. I start out with color fields and add the drawing later, the same way my last Berlin pictures also worked out. But I have to make far more drawings, just as I did back then. Who will take the burden of this terrible illness off me? An illness that just pops up and throws me off my course, all afternoon and even worse at night. Who will heal me? I’d give everything. [.] Definitely no more strength left for a large canvas. [.] I am excited about painting in violet [.]. Painting in violet, red, green", he captured in his diary (ibidem, p. 31). The life on the alp, just as once the Berlin street life with the loose women, would become Kirchner’s central theme during the first years of his "new" life in Davos and the surrounding mountains. "Bergdorf mit rosa Kuh" (Mountain Village with Pink Cow) depicts a summer retreat, a view of the huts with their whitewashed chimneys huddled against the mountain, outlines the narrow path along the slope up to the plateau where the farmers live a simple life with their cows, goats and sheep. Kirchner shades the hillsides’ lush green with dark arches, in the foreground we see a presumably abandoned haystack covered with fresh shoots, and in the upper red margin of the landscape depiction we find the pink cow! Her head raised she casts a curious glance at the valley below. Kirchner sought to find balance by adapting himself to the peasant life and by absorbing the sublime nature and the changes over the seasons. The mountain dwellers became his friends, he captured their everyday life in photographs and memorialized them in the early Davos landscape paintings. Kirchner also shot the view of the Stafelalp from his summer cabin and used nearly the same motif for the view of the mountain village. Just as it is the case with paintings made in Berlin or on the island of Fehmarn, Kirchner uses obvious color shifts and shifts in perspective to add the same dynamic to the first Davos landscapes , and thus transfers the island and city expressionism to a mountain expressionism: the luscious pink, the intensive red, the contrast of blue, green and yellow. [MvL]
Ulteriori informazioni
+
Vendere
Desidera vendere un simile oggetto?
+
Registrare di
Ernst Ludwig Kirchner
+
Domande sull´acquisto
+
Contattare esperti
229
Ernst Ludwig Kirchner
Bergdorf mit rosa Kuh, 1919/20.
Olio su tela
Stima:
€ 300,000 / $ 357,000
Risultato:
€ 337,500 / $ 401.625
(25% commissione inclusa)
Ulteriori informazioni
+
Vendere
Desidera vendere un simile oggetto?
+
Registrare di
Ernst Ludwig Kirchner
+
Domande sull´acquisto
+
Contattare esperti
Altre immagini 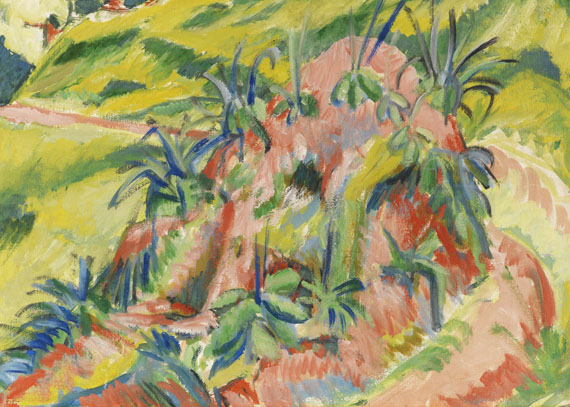 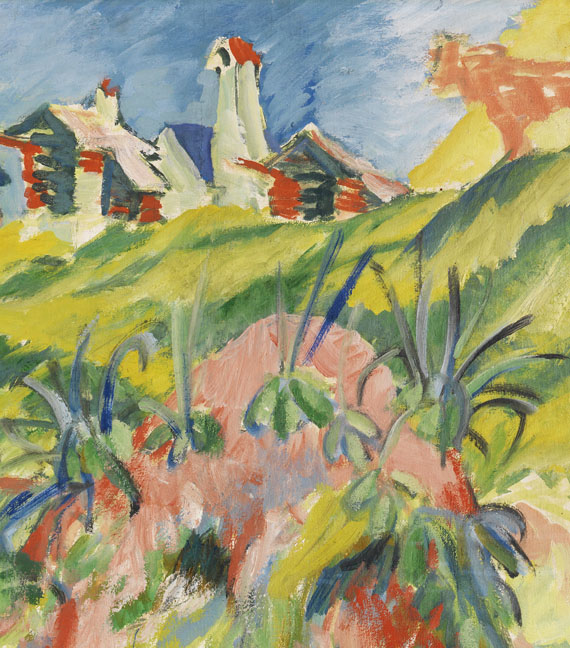 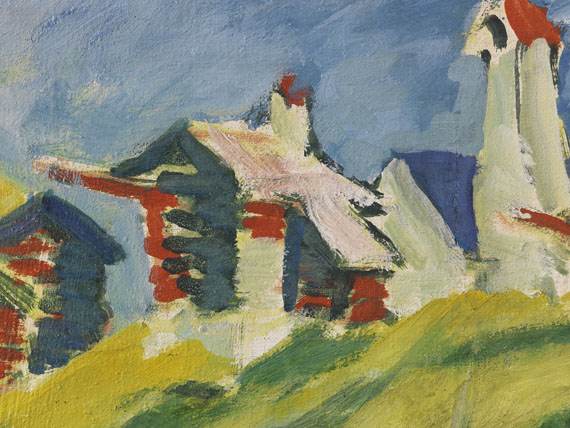